The Melancholy Case of Archbishop Abbot

On July 24, 1621, the Archbishop of Canterbury, George Abbot, killed a gamekeeper named Peter Hawkins while hunting in Bramshill Park. That unfortunate accident was the first scene in a protracted legal drama that would become a cause célèbre in Jacobean England.

Although accounts of the killing differ, they all agree that it was an accident, and they place the blame squarely on Hawkins’ shoulders. The organizer of the hunting trip, Lord Zouch, claimed that Hawkins thrust himself behind a deer and was struck when Abbot overshot his target,1 while Sir Dudley Digges reported that Hawkins was killed when the deer unexpectedly leaped upward.2 The Venetian ambassador gave a slightly more scandalous account, alleging that Hawkins was drunk at the time of the accident.3 In the end, the coroner returned the unusual verdict of death per infortunium suae propriae culpae (by misadventure and his own fault).4

Abbot informed King James I of Hawkins’ death right away. The King responded sympathetically, saying that only a fool or a knave would think badly of the Archbishop.5 And while the common law required those guilty of homicide to forfeit their goods to the Crown, James assured Abbot that he “would not add Affliction to his Sorrow, nor take one Farthing from his Chattels and Moveables, which were Confiscated by our Civil Penalties.6“ 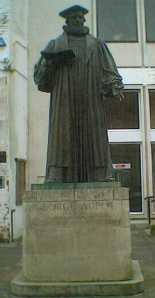 Statue of Archbishop Abbot in Guildford. Photo by SGBailey at en.wikipedia (Transferred from en.wikipedia) [GFDL (www.gnu.org/copyleft/fdl.html) or CC-BY-SA-3.0 (http://creativecommons.org/licenses/by-sa/3.0/)%5D, from Wikimedia Commons

The matter might have rested there were it not for the scruples of several clergymen who were awaiting episcopal consecration at Abbot’s hands. In a letter to the Marquess of Buckingham, the King’s favorite, the Bishop-Elect of Lincoln, John Williams, wrote that to leave “a man of blood Primate and Patriarch of all [the King’s] Churches is a thing that sounds very harsh in the old Councils, and Canons of the Church.7” Several other bishops-elect (including the soon-to-be-[in]famous William Laud) also refused to be consecrated by Abbot.

Meanwhile, Abbot kept a low profile in the immediate aftermath of Hawkins’ death. In September, Thomas Locke wrote to Sir Dudley Carleton that “my lo[rd] Grace of Cant[erbury] hath ever since his misfortune kept himself from Court & Council, & is much afflicted, yet he told a friend of his lately that he was comforted by the King’s favour.8” However, by mid-September, Abbot was back at court.9 Despite his gracious treatment by the King, the rumor mill went into overdrive. According to the Rev. Joseph Mead, some said that Abbot had been deposed, while others claimed he would be pensioned off in exchange for resigning the archbishopric. People also speculated about the game of ecclesiastical musical chairs that would result if Abbot left Canterbury.10 Mead also claimed that the King’s attitude toward Abbot had hardened, and the unfortunate prelate had been ordered to curtail his attendance at court.11

Faced with a tumult among the prelates, James appointed a commission to investigate whether or not Abbot was canonically irregular. The commissioners were a mixture of bishops and judges, and on October 3, 1621, James gave them their terms of reference.12 They were to answer three main questions:

Abbot was invited to submit evidence to the commission. He sent a copy of the coroner’s verdict along with a personal explanation. He also asked the commission for permission to be represented by counsel.13 This request was turned down, for the commissioners claimed that they had “no Warrant to hear Counsel; nor could we in any justice hear any, unless the Credit of the Church and Honour of the King had their Counsel likewise on the other side.14”

The legal issues in Abbot’s case were incredibly esoteric, as can be seen from two tendentious tracts written in October 1621. The first, entitled “An Apology for Archbishop Abbot,” was written anonymously.15 It begins by citing examples from the Old Testament where priestly figures continued to exercise religious functions even after shedding blood, then quotes several canonists to show that a casual homicide does not lead to irregularity if it was committed in the course of lawful activities.

However, the question of whether or not it was lawful for Abbot to hunt was a complicated one. Obviously, there were no secular laws against hunting, but the canonical situation was murkier. Although there was an ancient canon (De clerico venatore) that allegedly prohibited the clergy from hunting, the Apologist argued that the canon was not applicable because it only prohibited hunting with dogs and hawks (cum canibus et Accipitribus) and hunting for pleasure (voluptatis causa). Abbot was not using either animal at Bramshill, and he undertook the hunting trip on the advice of his doctor (the Apologist claims it was meant to help with his gout and kidney stones). At any rate, the canon could not be enforced because it ran afoul of the statute 35 Hen. 8 c. 16, which declared that pre-Reformation canons that conflicted with the laws and statutes of England or the royal prerogative had no effect. The Carta de Foresta gave archbishops and bishops the liberty to hunt, and the statute 13 Ric. 2 c. 13, allowed clergymen with annual incomes of £10 or more to keep greyhounds or other hunting dogs. In other words, if the secular law allowed clergy to hunt, the canonical prohibition would have no force.

The Apologist’s arguments were rebutted by the noted lawyer Sir Henry Spelman in “An Answer to the Foregoing Apology for Archbishop Abbot.16” He answered the Apologist’s Old Testament precedents by pointing out that the New Testament had superseded the Old. He also cited Christ’s admonition to Peter to put up his sword (John 18:11; Matthew 26:52) as evidence that the clergy were forbidden to shed blood. Spelman acknowledged that there had been cases where clergymen committed accidental homicide without incurring ecclesiastical disabilities, but he held that they were distinct from Abbot’s case because they were basically freak accidents. Abbot, on the other hand, intended to kill something, even if it was not a man. Therefore, according to Spelman, the homicide was not truly ‘accidental.’

Spelman also tried to counter the Apologist’s attack on the canon De clericos venatore. He accused the Apologist of engaging in selective quotation to make the claim that it only banned hunting with dogs and hawks, for the full sentence (Episcopum, presbyterum aut diaconum canes aut accipitres aut huiusmodi res ad venandum habere non licet) appeared to impose a much wider ban on all instruments of hunting.

Furthermore, the canon was not actually repugnant to the secular law. The Carta de Foresta did not allow bishops to hunt; it simply allowed them to “take a deer.” Spelman claimed that it was possible to read this provision in accordance with a canonical prohibition against hunting. Noblemen could “take a deer” by hunting, but bishops could only do so through their servants. Spelman also attempted to dismiss the Apologist’s citation of 13 Ric. 2 c. 13 by arguing that, because it was framed in the negative rather than the positive, it did not overrule canon law. In other words, the statute said that no priest who made less £10 per year could own hounds, but that was not the same as saying that it is lawful for priests with incomes of £10 or more to keep hounds (here, one might be tempted to accuse Spelman of casuistry!).

The commissioners themselves seem to have been befuddled by the obtuse nature of the case.17 When they reported back to the King on November 10, a majority of the commissioners were unable to agree that Abbot had incurred an irregularity–

Because the Canons and Decrees themselves are so general and so ready to entertain Distinctions and Limitations, the Doctors and Glosses so differing, Inferences and Disputes so peculiar to every Man’s Conceit and Apprehension, Authorities of Canonists and Casuists so opposite in this very case in hand; that we could not return to your Majesty any unanimous Resolution or Opinion in the same.

They were similarly unclear on the question of scandal. Although they stressed that they personally believed that no scandal had been given by Abbot, they acknowledged that “the Weak at home and the Malicious abroad” might think otherwise.

The commissioners also failed to agree on how to remove the irregularity. Everyone agreed that the King could grant a dispensation, but some commissioners believed that he could do it by issuing Letters Patent, while others felt that it would be better for him to order several clergymen to absolve Abbot.18

In the end, James issued a commission to several bishops empowering them to dispense Abbot from the canonical effects of Hawkins’ death.19 In light of the uncertainty over Abbot’s case, it should come as no surprise that the document adopts a rather cagey tone. It stresses that Abbot bears no guilt for Hawkins’ death (the unfortunate gamekeeper is left to shoulder the blame for his own demise), and states that a dispensation is only necessary because the accident might have blemished Abbot’s character! The bishops duly issued the dispensation on December 12.20 The King subsequently confirmed the dispensation on December 24.

From a legal standpoint, the affair was at an end. But Abbot never really got over Hawkins’ death. He kept a monthly fast on a Tuesday (the day the accident occurred), and he made financial provision for Hawkins’ family.21 In the words of Thomas Fuller, “this keeper’s death was the archbishop’s mortification.22”

14 See the Lord Keeper’s note at the bottom of Abbot’s letter in Reliquiæ, 122.

3 Responses to The Melancholy Case of Archbishop Abbot